This post was authored by our Digital Developer, Will Landon.

When I was younger, I was home from school one day because I was sick, I think I had a fever. So being sick at home and a kid I did what any other kid would do in my situation. I was channel surfing trying to find cartoons to watch, and in my search I came across one of those infomercials for a food processor.

I was only about ten or so at the time so I found it exceedingly interesting to watch as the man promoting the product as he chopped up all sorts of fruits and vegetables. He even took a giant chunk of ice and reduced it to muss in seconds. I was so enraptured by what I was seeing that half an hour went by without me even realizing it. Now for me at ten, half an hour was a long time, and even more incredible, I wanted to buy that food processor. I was TEN and I wanted a food processor! It’s incredible when you think about it. And now looking back on it I realize how the salesman managed to keep my attention and make me want to buy a food processor. He was upbeat and engaging. Everything he said or did drew your attention in. He described the product in detail and even showed how it worked, and then at the end he offered a special deal to anyone who called within a certain amount of time. It’s a great formula for sales, but with less and less people watching commercials, thanks to DVRs, Apple TV, etc, these tactics don’t have as much effect as they used to. Or do they?

These three tactics for hooking a buyer can be used with great success by applying them to social media sites such as Facebook, Twitter, or Instagram. Social media is today’s equivalent of TV. It is where a vast majority of people get their news and entertainment. So why not make use of such a valuable resource?

Facebook applications can easily implement the tactics that were used in the food processor infomercial. An advertisement can be created and used as a hook to reel people in to see what you have to offer. Most advertisements on Facebook come in the form of slogans or intriguing images that can catch the attention of the customer and entice them to read about the product. The use of video ads can also yield similar results, especially if the product you are trying to sell is used in the video. An important question to keep in mind when deciding whether to use an image or video is, “How is the product used?” If the product can be used in active and interesting ways then it would be great for a video since the video can capture the full use of the product, whereas images would be better suited for things like food. 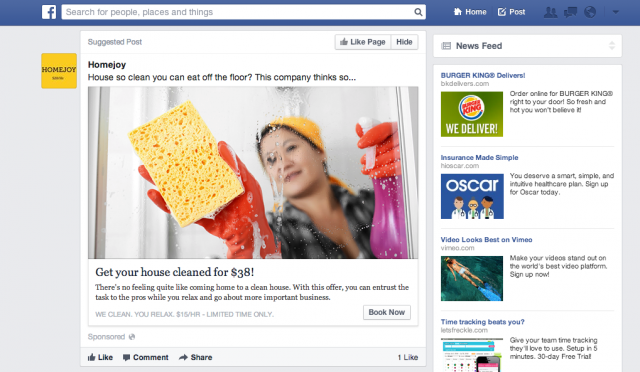 Once the customer has been engaged the next step is to show off the product. Intriguing images that act as links are more eye catching than just listing products. The images would then lead the customer to more descriptive information about that particular product. It is also a good idea to have a larger version of the product image here to give the costumer a better look. Pricing can also be listed or a link can say, “Click here to find out more” ,and will redirect the customer to the main website where all the products are listed. It is here that the products can be ordered.

Finally, since the customer is already utilizing their Facebook account to make the transaction, we are able to offer a “special deal” to the customer, where they share a post about what they purchased, or invite other friends to use our Facebook app, in return for a percentage of their purchased being discounted, free shipping, or a small gift. Now, not only has a sale been made, but the customer has also done some valuable advertising for us by placing our brand in front of a dozens of potential customers from a similar demographic. Since nearly 75% of online shoppers are unlikely to share this type of information, it’s a perfect way to leverage a discount in order to spread awareness of the brand and it’s app.

We’ve all seen infomericals before, but now that I’ve laid out a way to leverage the selling power of the “ShamWow” and “Flex Seal” into social media, we can take those time-proven tactics and utilize them to boost sales, conversions, or website visits. Have any other tactics and techniques to add to the list? Leave them in the comments below and let’s discuss!

How to Achieve The Blue Tag: Getting a Featured Tag on Tumblr.Social Media